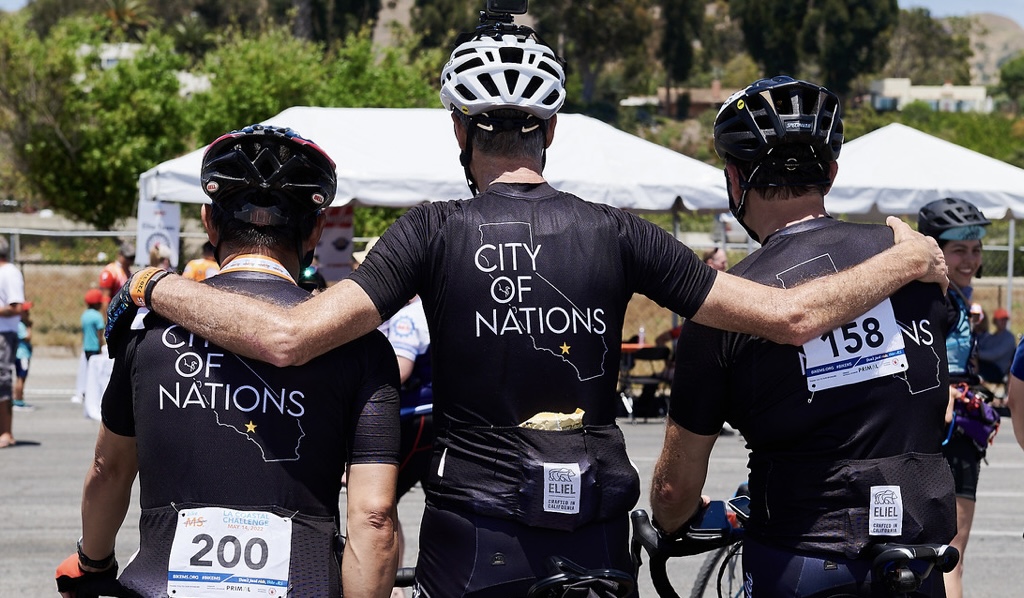 In my free time I like to ride a bike – the kind without a motor. In the last few years I’ve been fortunate to participate in activities and events organized and sponsored by an organization called All Clubs LA. All Clubs LA, as the name implies, is a group that works to intermix the various cycling clubs and cyclist across Los Angeles.
The Pritzker Prize winning architect Thomas Mayne has said that Los Angeles is the most balkanized city in the United States. So devoted was he to this notion he, despite a thriving career in Los Angeles, he re-located to New York City a few years ago. The classic dig on LA is that we’re all stuck in our cars and have only limited and self-selected interaction with our fellow Angelinos. Cycling gets us out of our cars – that’s some progress. The next road block to intermixing is that cycling has always been a predominately white male space with other cyclists forming their own separate groups – (particularly in our very “balkanized” city, not to mention country.)
As an immigration lawyer I particularly appreciate the mission of All Clubs LA. The parallels are many – but primary similarity is the desire to build community between folks from different backgrounds. We all have an affinity for people that look and act like us. It just seems “easier.” We have to leave our comfort zone in order to meet the other. Right now, our country, in large numbers, doesn’t want to do that. Why would I, or should I do that, they seem to demand. Their logic seems to be, if Fox news pundits are to be believed, that embracing the other only has a down side. They believe that it’s some sort of zero sum game. But studies have shown that immigration and integration, like all endeavors that embrace diversity, actually allow communities to thrive and improve lives. Indeed, we are all enriched when exposed to different histories, traditions and fresh ideas. This includes meeting and riding with cyclists who are “different” than us.
All Clubs LA creates events that make a space for this cross pollinating to happen. This is probably different from what I do as an immigration lawyer as the immigration system is really set up in many ways to force diversity on to society through an application process, and at times litigation, guided by rules and regulations made by congress and the court system. All Clubs LA on the other hand makes a space that fosters discourse through social media and more importantly in person – scheduling rides and other events we can discover our shared humanity rather than defaulting to false perceptions and tropes.
In the past All Clubs LA has participated in rides to Watts Towers, the all-important Ride 4 Justice organized in response to the continuing police violence against Black citizens, and a ride to Velo Pasadena which serves as a repository of cycling history including a bicycle ridden by the great Major Taylor, until recently, erased from cycling history – like many non-white cyclists in our history. All Clubs LA has organized BBQs across the cycling divide hosting bike riders from throughout Los Angeles and most recently the All Clubs Gala, earlier this year, which saw a diverse community of cyclist not only sans helmet but in black tie for very classy evening.
Unfortunately, immigration process does not always lend itself to this type of “soft diplomacy.” Immigration often entails more structured and contentious pathways – although the goal remains the same. That said, both spaces benefit from education and human contact which foster “ah ha” moments and make us, our community, our country and world all the better for it. Think globally, act locally.